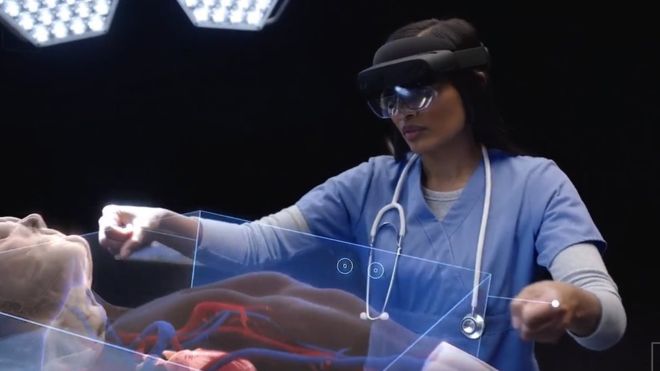 A few years on from the first Hololens, Microsoft Hololens 2 is available for preorder for $3500. In comparison, its lighter and smaller than the original and has some significant improvements. Due out later this year, it will only be sold to corporations, who wish to make this technology available for their workers and wont be sold to individual customers.

The Hololens 2 is designed with "first-line workers" in mind - from auto shops to factory floors, operating rooms and out on the field doing on-site repairs. It's design is keeping in mind that people who work with their hands find it hard to also use a smart phone or a laptop. It's all about helping in the areas that the smart phone type technology can't help with.

A lot has changed with the Hololens 2 compared to its predecessor. It's a fairly large step forward and packed with new technologies. This version is more comfortable, so wearing it for extended periods will be easier and it has an entirely new display system. Another improvement is its field of view which is much larger, so you don't have things jumping in and out of view. It features new technologies like an ARM processor, the Azure Kinect sensor and new eye-tracking sensors.

Other features include realistic sounds coming from two speakers, as well its ability to see what your hands are doing more accurately. The visor also flips up. Also new is its 8-megapixel front-facing camera for video conferencing, with a full 6 degrees of tracking and it also uses USB-C for charging.

A major area of improvement has been the field of view. The first Hololens could only show holograms in a somewhat small box, directly in front of you. If you were to turn your head just little bit, the holograms would disappear from your field of view. Another limitation of the original was that the holograms would clip out of existence while you were looking right at them. It could be compared to viewing the digital world through a letterbox slot. Microsoft has rectified this issue by doubling the size
of the field of view. In doing this, it doesn't feel like you're looking through a rectangle anymore. According to Microsoft, its like each eye has the equivalent of a 2k display in front of it. A more precise spec is that it has 'holographic density of 47 pixels per degree', which means you can read about an 8-point font size.

Normally with technology products, manufacturers often seek improvements by increasing battery power or using faster processors and the like. But Microsoft, in order to improve the display, has realised it also needed to be lighter and has used a new kind of display technology for the Hololens 2.

Laser-based displays are becoming popular among VR/AR based technologies. Intels Vault project, which involves the use of lasers, and North Focals smart glasses, both use this technology. Microsoft is taking this same technology one step further. Hololens 2 lasers shine directly into a set of mirrors that oscillate at 54,000 cycles per second, at this speed reflected light paints the display. These two peices working together, form the basis of microelectromechanical system (MEMS) display. While that part is hard enough, the hardest part for this display is getting the image right into the eye ball.

The North Focals project has solved this problem by using holographic film on the lens, to reflect the image directly into the retina. This of course has drawbacks, such as a tiny display with low resolution. The most problematic part is simply ensuring the display is aimed correctly at your eye. It means for North Focals, the image will sometimes disappear completely, if it is misaligned.

Wave guides are an important feature and were used with the original Hololens. Microsoft created a whole new etching system for the wave guides for Hololens 2. Wave guides involve pieces of etched glass that reflect the holograms in front of your eyes, directing light to the right place.

Hololens 2 wave guides are much lighter as there are two sandwiched glass plates instead of three. By increasing the angle of the mirrors that reflect the laser light, wider angles are achieved, resulting in a bigger, brighter image. Due to the fact that wave guides lose a significant amount of light, the lasers in the Hololens 2 are much brighter. Displays were set at 500 nits for a demonstration but Microsoft could go much brighter for the final version, depending on the power draw.

While alignment is easier with wave-guides, it is by no means perfect. This is why Microsoft uses two small cameras on the bridge of nose, directed at your eyes. This measures the distance between your pupils to get the image to just the right place for perfect viewing, as most peoples eyes are not evenly placed. Another side point of these cameras is that they can scan your retinas to log you into the Hololens 2 securely. There is also support for the new Windows Hello.

Putting these three technologies together, lasers, mirrors and wave guides, you get much brighter display with a wider field of view. The wave-guides in the Hololens 2 don't require fitting or measurements, You can pretty much just put it straight on your head and get going. It requires significant computing power to achieve this.

Hololens 2 uses the best of new, innovative technologies, as you would expect from Microsoft.