How VR Is Revolutionizing The Material Handling Industry 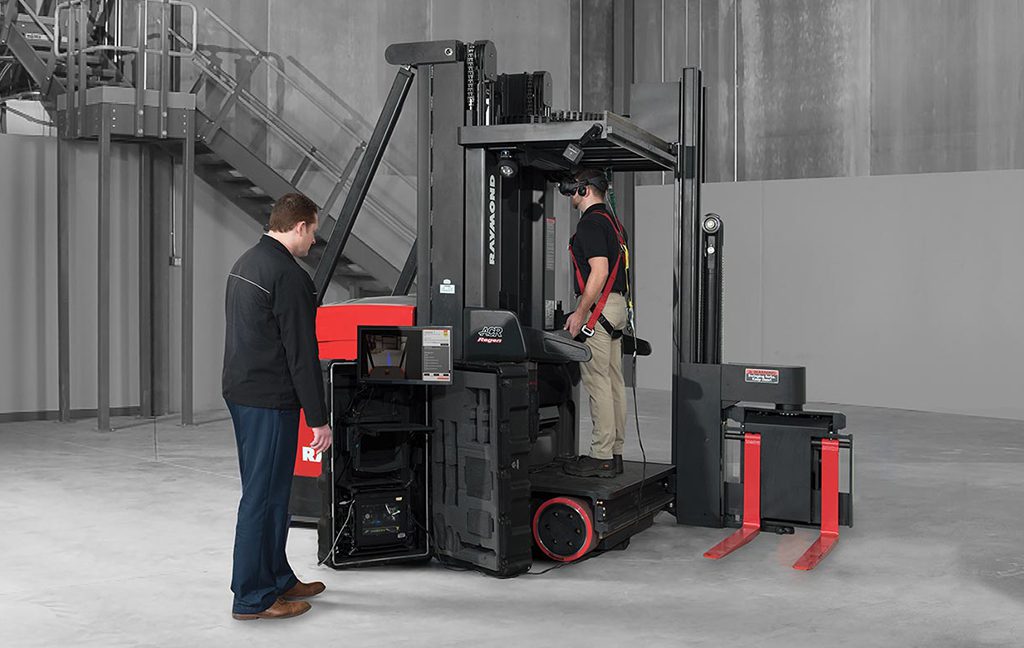 Operating a forklift with efficiency takes a lot of skill and can take a long time to master. Driving a forklift requires good spatial awareness, especially in a busy commercial/industrial environment. Think about training new drivers in such an environment, filled with risks and fraught with danger, it is not something that can be conducted willy nilly. Someone could get hurt, seriously injured or even killed if the trainee were to make a mistake. Forklifts are heavy equipment and care is needed while under operation. It can take a lot of practice for a trainee to become confident in his/her abilities. Raymond Corporation, who is a subsidiary of Toyota and is a large supplier of forklifts are looking for a better alternative.

Stacey Patch is Raymond’s Virtual Reality Simulator Business Manager. Her team have the task of designing a VR simulator. They have looked at various different VR project from around the world, across different industries from flight simulators to medical training simulations. It’s clear to see the potential advantages of this technology for forklift training. Patch goes on to say, “Looking at the way this technology has been used to enhance training in many industries, we realized the same benefits could seamlessly be carried over into the material handling industry”. The team settled on an exclusive partner FreeRangeXR located in Sausalito, California. Also discussed was using the HTC Vive as it ticks all the boxes the simulator needs. The main reason the Vive was chosen was because it offers good enterprise solutions and has extended support.

Studies have shown that using simulators to train workforce offers better learning retention and greater confidence going into the job. It is also proven that this is a cheaper alternative to standard training. Researchers at Iowa State University have studied VR training in welding simulations with the results showing a massive 41.6% increase in certifications and a 23% decrease in training time overall.

The Raymond simulator was showed off at SXSW last march. The physics were true and you could feel the interaction. When you turn you can almost feel the momentum of the heavy machine. It gets your heart pumping when the fork virtually ascends into the air to grab a heavy pallet. Virtual Reality Apps of this kind are really turning heads and the market space is ever growing. VR is a powerful tool when it comes to realistic, intensive training. One of the best things about this simulator is that it’s actually quite fun to use, which of course aids in the training process. VR training is becoming more and more commonplace.

The CEO of Raymond, Micheal Field said “In developing the Raymond Virtual Reality Simulator, we saw an opportunity to help avoid potential product and warehouse damage while increasing overall productivity and efficiency,” he also states “At the same time, we wanted to advance best practices in next-generation manufacturing as well as use technology to pique the interest of younger talent and use the simulator as a key tool for recruitment.”

The greatest thing about Raymonds simulator, is that similar to a flight simulator using real plane cockpit, it utilizes the actual forklift they will be using. Because of this, every gauge is in its place and controls are in the correct position. Raymonds VR simulator can be added to any of Raymond forklifts, either brand new or existing forklift models. This is the first simulation of its kind as it interfaces with the actual forklift and is using “sPort (simulation Port)” technology.

This innovation has earned the Raymond company its place on Fast Company’s 2019 Most Innovative Companies list in the categories of virtual and augmented reality. Raymond also picked up the International Intralogist and Forklift Truck of the Year award and also won an Edison Award, quite a haul and a great result. There is now no question we will be seeing more and more VR products of this kind being used in a variety of training applications.