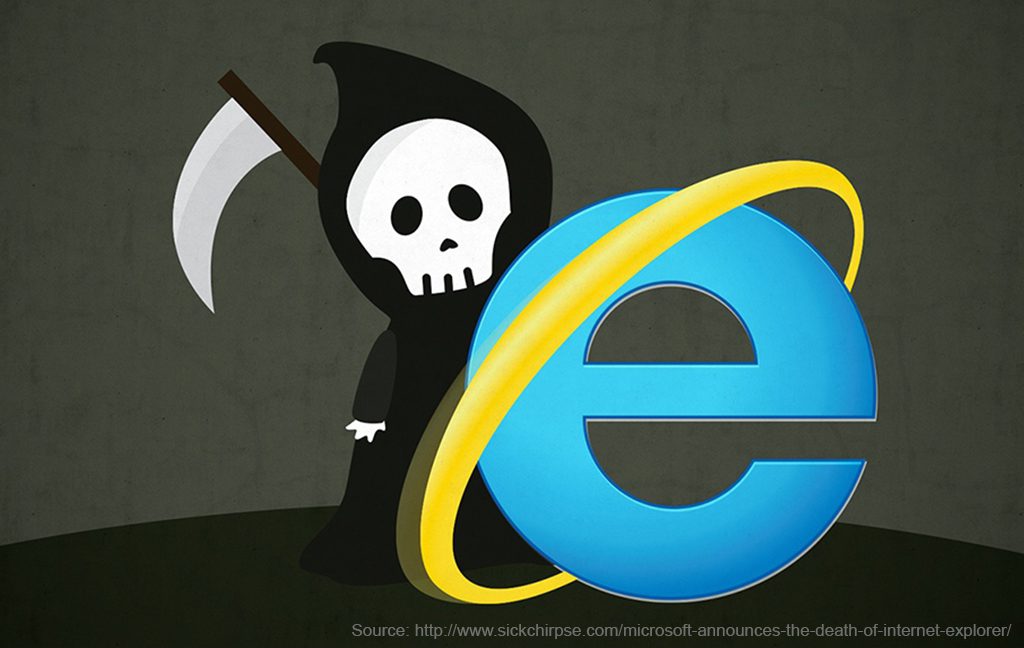 Internet Explorer has certainly passed its use by date. Not only does it look and feel old hat, but in 2015 Microsoft chose to discontinue it. Microsoft would like all users of Internet Explorer to refrain from using it and switch to a more up-to-date browser.

Since 12th of January 2016, Microsoft has not provided security updates, which patch vulnerabilities that can be exploited by malware, or any technical support for Internet Explorer. This means IE is unable to protect its users from new threats, so your data is not always safe. Regular security updates are needed to protect computers from malicious attacks.

Without these critical security updates, your PC does become vulnerable to harmful viruses and spyware, along with other various malicious software, which can steal your business data and information.

Chris Jackson, Microsoft's cybersecurity expert explains that Microsoft customers still ask Internet Explorer related questions regarding business. The majority of internet users in this day and age use up-to-date browsers like Google Chrome, FireFox, or Microsoft’s Edge. The problem that some businesses have is that their older web apps or websites were designed for Internet Explorer. Using Internet Explorer today is just a 'compatibility solution'.

Jackson goes on to say he doesn't even consider Internet Explorer to be a browser, at least in the modern standards-based sense. He does clarify that it's still fine to use IE where necessary, just that companies should not be using IE as its default browser. Internet Explorer is still necessary for some enterprise solutions.

“You see, Internet Explorer is a compatibility solution," wrote Jackson in the blog. "We're not supporting new web standards for it and, while many sites work fine, developers by and large just aren't testing for Internet Explorer these days. They're testing on modern browsers".

"So, if we continued our previous approach, you would end up in a scenario where, by optimizing for the things you have, you end up not being able to use new apps as they come out. As new apps are coming out with greater frequency, what we want to help you do is avoid having to miss out on a progressively larger portion of the web."

Jacksons warning is fair, but Microsoft hasn’t given businesses a great alternative. Microsoft released its Edge browser around four years ago, which was coupled with Windows 10. But Edge still continues to need Internet Explorer for the corporate intranet and you still need Internet Explorer to run older, less secure technology. Also, Edge has not been available on Windows 7 or Windows 8, which made things more complicated for IT admins.

Microsoft has tried a few different methods to help businesses improve their older web apps, but for the most part IT admins have taken the easy way out and continued using Internet Explorer, as it has various compatibility modes that they need.

When Edge released, it offered incredible performance and was a viable alternative to Chrome and FireFox. The problem was, Edge never really caught on in the same way that Chrome did when it was first released. Edge did not support legacy technologies and only offered IE 11 for enterprise solutions.

Microsoft is now making the Edge browser Chromium-powered, which basically means it's basing it on the technology Google use in their browser, Chrome. It's quite clear Microsoft acknowledges that Chromes market share makes it the standard for today, for the everyday web user to IT admins. Edge is also being decoupled from Windows 10, which means users will now be able to download and install Edge on Windows 7, Windows 8 and even Mac. In doing this, it should help businesses progressively move away from using Internet Explorer. It will still take a few years for all legacy web apps to disappear completely.