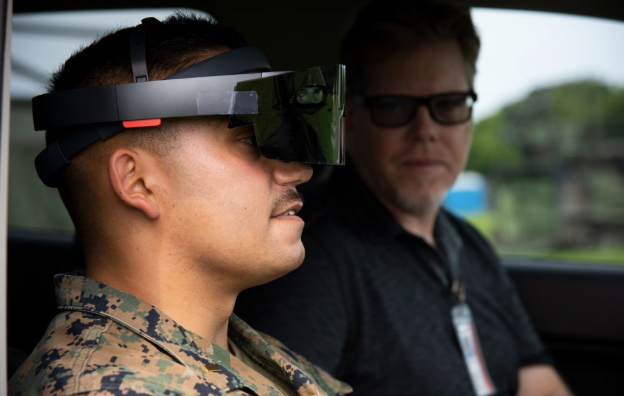 You would think that having state of the art technology on the battlefield would give you a significant advantage? Well think again, as the more tech you use, the more likely your crew will be detected from the RF used to communicate. There is a saying that always rings true in the armed forces. “If your transmitting, you can be found”.

While on duty, armed forces are often equipped with many communication devices such as GPS, mobile devices, SOS beacon, hand-held radios, or Wi-Fi, with these devices emitting their own radio frequency traceable back to the sender. This means that a lot of personnel participating in active battles will have to turn off their devices to avoid detection as its important to be invisible to the enemy.

Currently to ensure transmitting devices are secure, soldiers use a handheld tablet weighing over 4 Kilograms. The device is equipped with a handheld radio to scan for and identify their own frequencies. While this device does come under the banner of portable, it’s still very heavy and can be a pain to use. Not only that, it forces the operator to take his/her eyes off the battlefield in order to scan, which can be risky in a live battle.

With the downfalls of the current technology, a Naval Information Warfare Center (NIWC) Atlantic team, is currently developing and testing a new transmission detection system that utilizes Augmented Reality technology. It projects visuals over the user’s real-world environment providing an accurate hands free way of detecting their own RF waves. This new system is dubbed ‘The Spectrum Hunter’

Operators have a few ways to use and communicate with this device, such as voice recognition technology, and can interpret physical hand gestures. This allows the user to easily locate and deactivate RF transmissions, but at the same time have an active eye on the field looking for danger.

In an article for Naval Information Warfare Center Atlantic Public Affairs, Sinclair says “The Spectrum Hunter system under development is hands-free. As the user packs a similar-but-smaller geolocator receiver in a backpack and wears a headset inside a helmet that allows them to ‘see’ images of RF waves on an augmented reality screen superimposed over heavy sunglasses,” and also adds “The helmet is fitted with a sunshade so the equipment operates outdoors.”

NIWC Atlantic Acting Executive Director Peter C. Reddy adds.“The sky is the limit for potential uses for Spectrum Hunter.” and “Augmented reality can enable an operator to more quickly and easily locate the source; this is a paradigm shift toward capabilities of the future.”

In the future, the Navy hopes to build on and expand the use of its Spectrum Hunter. In time it is hoped that this technology will be used to detect the enemies RF waves as well. “Our team is initially focusing on detecting handheld radios and will expand the scope later to detect cell phones and other devices,” Sinclair explains. “In the future, we plan to modify it to identify RF waves emitting from enemy forces.”

The prototype of The Spectrum Hunter was showcased last July at Marine Corps Base Camp Lejeune, North Carolina. During this exercise, experts from more than 35 government agencies and industries were able to brainstorm potential insights on how they see this project and where it can go.