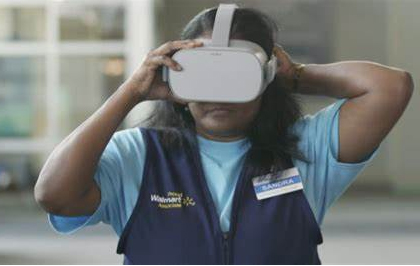 Walmart is joining forces with STRIVR to create a state of the art training platform using the best of Virtual Reality technology. The announcement was made during Walmart’s annual shareholder meeting. STRIVR is a VR based startup company based in Menlo Park. They have worked with companies such as PepsiCo as well as professional sports leagues such as the NFL.

During the meeting Walmart stated that it has been employing STRIVR’s technology in 31 of its training academies recently. This has proved very successful and Walmart hopes to roll out the program to all 200 of its academies.

A few years ago Walmart opened its very first training academy. Each is connected to a Walmart Supercenter and provides all employees in the general area with a classroom setting to learn for two weeks before starting an entry-level job or new role.

Using the latest Oculus headset, STRIVR’s technology lets the employees experience real-world scenarios. This means employees can prepare virtually for any situation they might deal with in the workplace, such as a highly crowded situations like Boxing day sales, or just cleaning up a spilt drink that a clumsy customer dropped on the floor.

Another advantage of using this type of training is that the instructor can see exactly what the student can see, which means if there is something the student missed, the instructor can quickly pick up on the issue and let the student know in real time what they have missed and how to address the issue. Other students can also see and weigh in/take tips from the overall performance of their peers. This can be a great learning tool as one can learn from others' mistakes.

STRIVR was co founded by assistant football coach Derek Belch alongside professor Jeremy Bailenson back in 2015. Bailenson concluded that VR training was the future as it was proven to be a much more dynamic and in depth way of learning, the trainee is more likely to retain knowledge gained from simulations rather than from a training video. VR training is a more tactile way of learning.

Virtual Reality technology has improved significantly over the last decade. This has lead to more widespread use in many sectors, especially in job training situations. Major oil companies have embarrassed this technology the most. We are also seeing major leaps in the health sector, helping train physicians in complex operation procedures, which has been seen over the last few years especially.

Mary Meeker, who is partnered with Kleiner Perkins said in a small article that she expects VR job training to be very important and will be gaining momentum in the coming years. She also spoke of STRIVR’s great success with Stanford football.

Walmart is expecting more than 100,000 of its new employees will go through its Academy training in due course. They have said this will be “an integral part of that experience.”

With major players like Walmart joining the VR training revolution, its certain that other major retailers will adopt this style of training, as the benefits from VR training have been proven time and time again.